What is a Fiscal Regime?

Before countries begin exploring and later producing their prospective oil and gas resources, several key questions should be answered:

Lebanon adopts a tailored version of the production sharing contract as this category of contracts suits better its status: It provides the State large control over the development of the sector but puts all the risks associated with exploration and development at the side of the companies.

According to the Offshore Petroleum Resources Law, Lebanon adopts a Production Sharing Contract between the State and a consortium of at least three pre-qualified companies. The detailed terms of the contract are defined in the Exploration and Production Agreement (EPA) that provides the petroleum Right Holders the exclusive right to explore, develop and produce oil and gas in a specific block in Lebanon’s offshore where Right Holders bear all costs incurred during the exploration and development phases.

In case of failure to find or develop commercial discoveries, Right Holders are not compensated for their investments and exit the license accordingly. In case of success, once production starts, the State collects royalties from the produced petroleum and Right Holders recover their costs gradually based on a Cost Petroleum Ceiling. Profit Petroleum is then shared between the Right Holders and the state according to the R-factor formula. Right Holders then settle their due taxes when they are in a tax position. The total government take is composed of three components:

The following interactive chart describes the detailed dynamics of the Lebanese PSC. 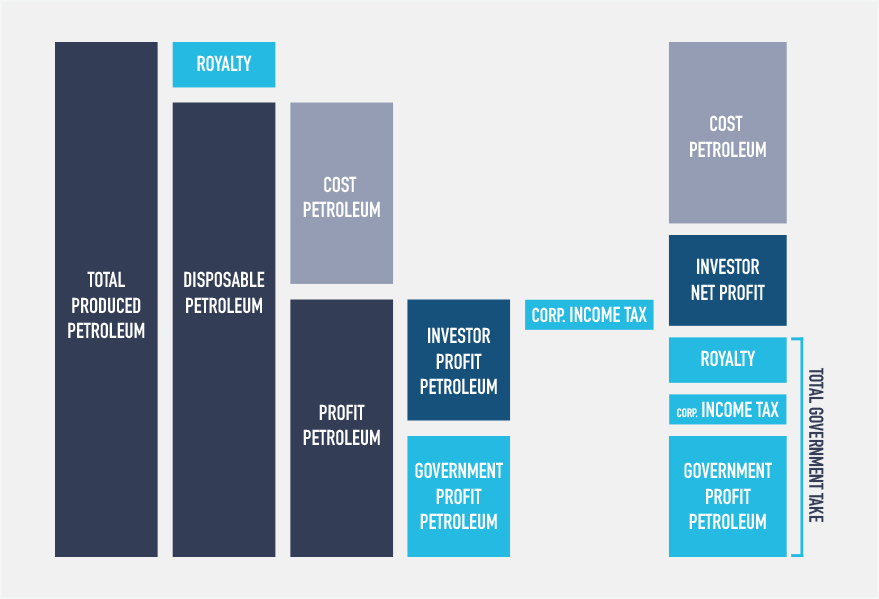 Before countries begin explorioil and

The Lebanese Petroleum Administration plays a central role when it comes to monitoring and auditing the revenues (Royalties, Profit Petroleum and Area fees) as well as the recoverable costs generated under each EPA.

The process embarks early with the mandatory approval of various plans (Exploration Plan, Development Plan, Cessation Plan) prior to any work. These plans are further detailed into yearly work programs and budgets that require approvals before allowing any costs to be recovered.

During each calendar year, periodic reports are submitted by the Operator to the Lebanese Petroleum Administration for monitoring purposes. Periodic audit missions are then conducted by the Lebanese Petroleum Administration in order to validate the recoverable costs, the procurement process, the local content, as well as the revenues generated under each EPA. This audit is based on international auditing standards and the industry’s best practices.

The Government’s assurance level in the upstream oil and gas sector is high and this is due to the supervisory roles given to two governmental entities: The Lebanese Petroleum Administration, which performs the monitoring and auditing procedures as described above, and the Ministry of Finance, which conducts audits for tax purposes.