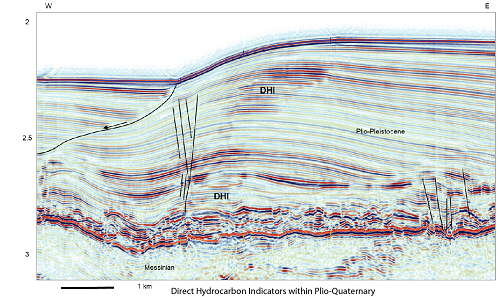 The key result of the study based on the 3D surveys interpretation,is the definition of 36 prospects grouped into 10 structures. For the seismic reservoir characterization, a pre-stack inversion was realized in the northern part of the survey. The results confirm the presence of gas in some stratigraphic traps.

The petroleum systems modeling performed previously, combined with the seismic characterization performed in the northern area, show that in addition to the probable presence of biogenic gas in the upper reservoirs, the probability of getting thermogenic hydrocarbons increases with depth. Furthermore, the presence of condensates and oil is expected in the prospects located along the basin margin.