In early-2015, a 3D seismic interpretation study was performed with the objective of assessing the hydrocarbon prospectivity of western offshore and south-eastern margin of Lebanon by interpreting five 3D seismic surveys acquired by PGS and Spectrum in 2012 and 2013 totaling 8848 km2.

This study enables the surveyed area to be divided into three different prospective zones: the Lebanon western offshore (deep) Levant basin with three features that have important consequence on the definition of prospects in this domain and that have been better 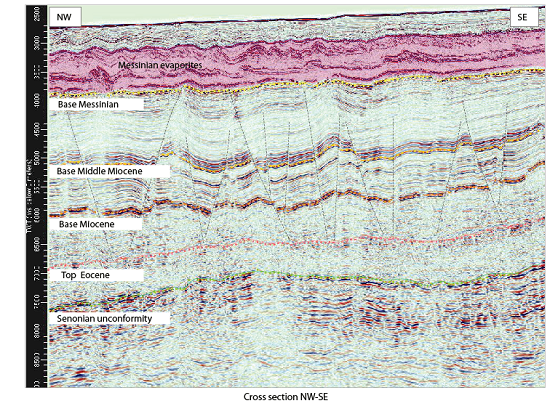 defined with the interpretation of the 3D; the Cyprus Arc Domain (northernmost western offshore) with the new 3D surveys covering the southern extension of structure previously identified from the 3D seismic interpretation of the northern survey and allowed for better understanding of the area; and the south eastern continental margin that had been better constrained with the 3D seismic interpretation. The key result of the study is the definition of 45 prospects grouped into 17 structures, because the individual prospects are stacked vertically, which increases the attractiveness of the area. Eight (8) of them have an areal closure greater than 50 km2 and nineteen (19) of them have more than 25 km2.