In 1947, while experts were searching for "Nickle-cobalt sulfide*" in the village of "Yohmor" at the bekaa valley in Lebanon, they found rocks and fossilized marine animals resembling rocky environments that are usually found near petroleum fields, and immediately, a company was founded in order to reveal the truth. This company confirmed that the area is rich in petroleum but the cost of its extraction is very high.

For this purpose, it was agreed that "Western Pacific" company will be in charge of exploration activities on its own expenses against a determined portion from the benefits in case of success but in case of failure, the company shall bear the losses entirely.

In 1953, the company has completed the installation of necessary equipment and machinery in the area and it has invited the President of the Republic Mr. Kamil Chamoun and his wife with the ministers and officers and journalists to attend the inauguration ceremony, and the First Lady Mrs Zalfa Chamoun has launched the first drilling machine 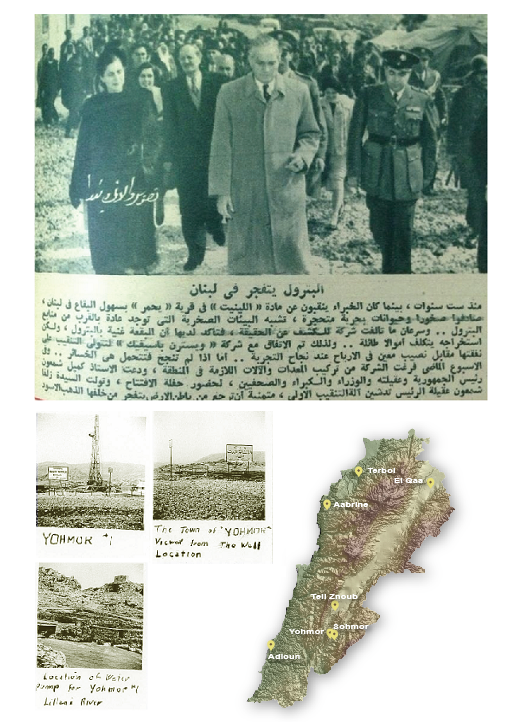 wishing that it will contribute to the extraction of the black gold from the ground. (This article is extracted from a newspaper in 1953).

Seven wells have been drilled onshore between 1947 and 1967 in Terbol, El Qaa, Aabrine, Tell Znoub, Yohmor, Sohmor and Aadloun. Bitumen and gas shows had been observed.

* Cobalt occurs in all Nickle Sulfide Ores. The main application of Cobalt is as free metal, in production of certain high performance alloys