In mid-2015, an interpretation study was performed on the data acquired from the airborne geophysical survey that covered 6000 km2, of which 2000 km2 covered the coast of Lebanon and 4000 km2 onshore.

The data interpreted support the presence of significant potential for discovery of hydrocarbons, and identified six areas of interest onshore and three areas of interest on the margin area. Furthermore, a dual seismic/gravity and magnetic interpretation was performed along parts of the 2D lines acquired by Spectrum that intersects with the gravity survey acquired by Neos. Poor seismic coverage and imaging quality on the margin had affected previous petroleum assessment, specifically in terms of risk assessment. 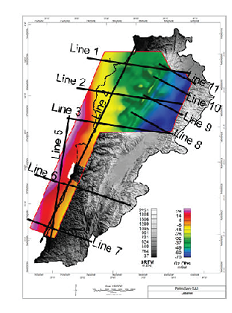 The study looks at the Triassic Reservoir only, and concentrates on the study area. The goals of the static (in-place volumes) calculations and uncertainty study are to determine volumes of gas in place.