What does it take to drill a well?

In January 2018 two Exploration and Production Agreements (EPAs) for block 4 and 9 were signed between the Republic of Lebanon and the consortium composed of Total E&P Liban s.a.l. (Right Holder Operator), Eni Lebanon B.V. and Novatek Lebanon (Right Holders Non-Operators).
In compliance with rules and regulations in vigour, the consortium submitted in March 2018 the Exploration Plans for blocks 4 and 9, which constitute steering documents describing the implementation of petroleum operations during the first exploration period consisting of:

In 2018 and 2019, the consortium resumed technical preparations and undertook additional geological and geophysical studies in addition to environmental surveys.

A series of competitive calls for tenders were launched gradually by the Right Holder Operator TOTAL E&P Liban s.a.l. throughout the year 2019 for the procurement of operation support services and number of service contracts were awarded subsequently. The drilling contract was awarded to Vantage Drilling Africa and the drillship that is mobilized to drill the first offshore well in block 4 is Tungsten Explorer.

Necessary permits for operations were awarded by the relevant institutions including, helicopter operation permit, import and management of radioactive material and explosive material permits to name a few.

The Environmental Impact Assessment (EIA) report approval for Block 4 was granted by the Ministry of Environment in February 2020.

The milestones listed above were necessary to start the drilling activities in block 4. 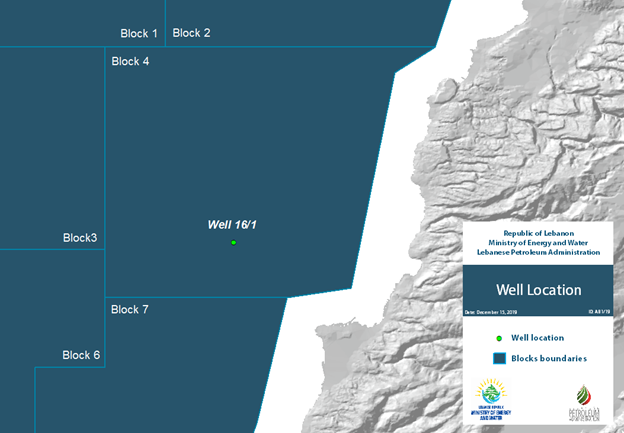 Exploration drilling in block 4 marks the first offshore exploration drilling in Lebanon – a frontier, deep water and previously unexplored area.
Drilling will last for up to sixty days. Afterwards the consortium will evaluate the results which are likely to come up in the following two months – in June 2020.
Several uncertainties will only be confirmed once drilling is completed keeping in mind that the offshore petroleum sector is a long-term sector. As a general rule of thumb in the industry, the Probability of Success (POS) of hitting a commercial discovery from the first exploration well is less than 25%. In the short-term, following the completion of the first exploration drilling two scenarios are envisioned:

The first exploratory well is a significant milestone that further confirms Lebanon’s commitment to develop its prospective offshore petroleum sector for the benefit of current and future generations.
In parallel, intensifying exploration activities will further confirm Lebanon’s petroleum potential therefore exploration drilling in block 9 will follow. Additionally the deadline for the Second Offshore Licensing Round is scheduled for the 30th of April 2020.